SFA to present surrealist play, 'The Breasts of Tiresias' 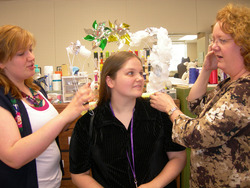 League City senior Rebecca Mersinger models a headdress fashioned from garden fencing, pinwheels and cupcake papers while costume designers Tiffany Craig, Fort Worth senior, and SFA costume professor Angela Bacarisse make adjustments. The headdress is one of the innovative costume pieces to be used in the SFA School of Theatre's upcoming production of Guillame Apollinaire's "The Breasts of Tiresias" at 7:30 p.m. Tuesday, April 26, through Saturday, April 30, in W.M. Turner Auditorium.

NACOGDOCHES, TEXAS - "Zany," "visually interesting," and "way out of the ordinary" are some of the descriptive phrases Stephen F. Austin State University Associate Professor Rick Jones uses to describe the School of Theatre's upcoming production of Guillame Apollinaire's "The Breasts of Tiresias." The play will be presented at 7:30 p.m. Tuesday, April 26, through Saturday, April 30, in W.M. Turner Auditorium.

The play centers on the female protagonist, Thérèse, who is tired of society's expectations of women and so lets her breasts float away, grows a beard, becomes a general and takes the name Tiresias. Meanwhile, her husband takes on the role of childbearing.

"If you know that Apollinaire introduced the term "surrealism" in his preface to the play, you are prepared for the bizarre chain of events that follow," explained Jones, the play's director. "The play becomes an extended game of 'What would happen if . . . .'"

First produced in 1917, the play was written in French. While there are two English translations, Jones was not satisfied with either, so he translated it himself, with the assistance of Texarkana senior Marissa Harding.

"We made some adaptations, but it's a pretty straight forward translation," Jones said. "It's about an hour long and really quite funny, in a Monty Python sort of way, complete with exaggerated movement, silly voices and cross-dressing."

To compliment the action, SFA Assistant Professor of Theatre Dana Gloege has designed a set that "looks like something out of a surrealist painting," Jones continued.

"I think our audience will enjoy this farcical treatment of seemingly serious subjects," Jones said.

"The Breasts of Tiresias" is a joint production of the SFA College of Fine Arts, School of Theatre and Mainstage Series. It is sponsored in part by Tipton Ford-Lincoln. It is recommended for mature audiences.