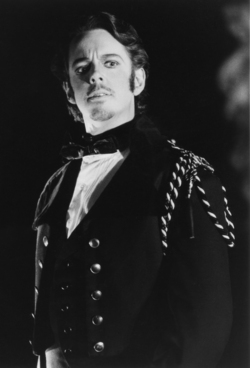 SFA Assistant Professor of Voice Bruce Fowler, who has a distinguished 20-year operatic career, will serve this summer on the faculty of the Austrian American Academy in Salzburg. Pictured above is Fowler in his role as Ramiro in the Minnesota Opera's production of Gioachino Rossini's "La cenerentola (Cinderella)."

NACOGDCOHES, TEXAS - Bruce Fowler, assistant professor of voice at Stephen F. Austin State University, is busily preparing for a trip to Austria this summer. But instead of pouring over guidebooks and mapping out an itinerary, he's carefully studying two operas by Wolfgang Amadeus Mozart.

Fowler learned in April of his appointment to the voice faculty of the Austrian American Mozart Academy in Salzburg, a program that provides specialized training for young singers in the performance of Mozart's operas.

The tenor will be drawing on his own 20-year operatic career as he serves as one of two vocal professors and provides training in role preparation for the select group of 40 international singers. After approximately a month of rehearsals, the academy will stage "Die Zaubeflöte (The Magic Flute)" and "Der Schauspieldirektor (The Impressario)," which Fowler will stage direct.

Fowler said he is excited about his first teaching and stage direction appointment in Europe. "This is a wonderful opportunity for me to work outside the campus, to learn more and to improve my pedagogical techniques," said Fowler. "I also see this as a great recruiting tool for SFA."

A member of the SFA voice faculty since 2006, Fowler has sung with the Paris Opera, La Scala, the Salzburg Festival, Lyric Opera of Chicago and New York City Opera. He has performed in venues such as Carnegie Hall and Tanglewood and theatres in Berlin, Barcelona, Rome, Montreal, Vienna and Brussels.

Fowler is considered a premiere interpreter of the music of the Italian bel canto, baroque and classical eras. His concert and recital repertoire encompasses 10 languages. Recent engagements include "Semiramide" with Deutsche Oper Berlin and "La traviata" with the Akron Symphony Orchestra, and a concert of Italian songs with Voces Intimae of Dallas. And with the combined SFA choirs and orchestra, he has sung "Carmina Burana," Giuseppe Verdi's "Requiem" and Richard Danielpour's "An American Requiem."

Fowler is scheduled to present a faculty recital, "Songs and Arias of the Bel Canto," in Cole Concert Hall at 7:30 p.m. on Monday, Sept. 26, as part of the SFA School of Music's Cole Performing Arts Series.