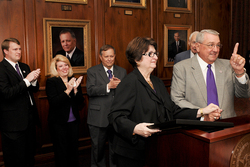 The Stephen F. Austin State University Board of Regents voted unanimously Tuesday to name the Early Childhood Research Center in honor of Dr. Janice Pattillo, who is retiring after 42 years of service to the university.

"Ed and Gwen Cole are two of our greatest supporters of this university," said Dr. Baker Pattillo, SFA president. "They don't have biological children of their own, but their children are the students of SFA, and they have been very generous in doing everything they can to make sure those students succeed."

Regents recognized Dr. James Standley, who is retiring after 41 years of service to the university, most recently serving as dean of the Graduate School. His duties as dean will be assumed by Dr. Mary Nelle Brunson, who will continue to serve also as associate vice president for academic affairs, a position she has held since 2008.

Regents approved the adoption of the institutional budget for the 2011-12 fiscal year, which totaled $217.9 million. Regents approved the capital infrastructure plan for 2011-12 totaling $4.9 million. The plan addresses capital renewal, deferred maintenance and renovation projects, including the remodeling and renovating of the theatre area in the Griffith Fine Arts Building; elevator renovations; replacement of carpet, furniture and showers in Steen Hall; soccer field drainage maintenance; repair and replacement of football stadium fencing; and replacement and upgrades to air-conditioning system components.

Regents recognized SFA Athletic Director Robert Hill, who was named Under Armour Athletic Director of the Year by the National Association of Collegiate Directors of Athletics. Hill is in his seventh year as director, and under his leadership, SFA teams have won 22 Southland Conference titles and have made NCAA championship appearances in football, men's basketball, women's basketball, volleyball, soccer, softball and indoor/outdoor track.

SFA Bass Club members Andrew Upshaw, a marketing senior from Hemphill, and Ryan Watkins, a kinesiology senior from Rockport, also were recognized by regents. The duo recently won the Mercury College B.A.S.S. National Championship in Arkansas. It was the second national championship in seven years for the SFA Bass Club.