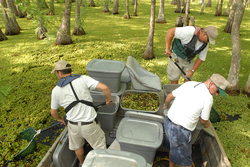 Texas Parks & Wildlife representatives remove giant salvinia from B.A. Steinhagen Lake near Jasper. The samples are being used by researchers at Stephen F. Austin State University's National Center for Pharmaceutical Crops who are studying the cancer-treating potential of the invasive plant.

NACOGDOCHES, Texas - A thorn in the side of area boating enthusiasts may provide a ray of hope for some cancer patients, according to recent research findings at Stephen F. Austin State University's National Center for Pharmaceutical Crops.

Giant salvinia is able to double in number and biomass in less than three days in optimal conditions and forms dense mats on still waters. The plant can regenerate even after severe damage or drying. The explosive growth of giant salvinia not only adversely affects the natural ecological system of the infested region, but it also causes considerable economic damage and sanitation problems.

Since 1980, the tiny salvinia weevil - Cyrtobagous salviniae, Curculionidae - has been introduced into most regions invaded by giant salvinia. The weevil is a strict specialist and has successfully controlled salvinia for years in some regions. Other attempts to control and eradicate salvinia through chemical and mechanical means have failed and may lead to an environmental backlash caused by the introduction of chemicals or bio agents into the ecosystem, Li said.

"For many years, I have promoted utilization as an effective and environmental approach to control invasive species," Li said. "I believe that positive actions such as identification of useful chemical components in existing invasive species and subsequent development of these species as medical or pharmaceutical crops would stimulate harvest and utilization."

Chris Moret of the Texas Parks and Wildlife Department and his crew have collected about 1,000 pounds of plant matter in East Texas for use in the study. To date, more than 30 different compounds, including four new compounds, have been isolated from the giant salvinia. Further tests of the bioactive compounds isolated from giant salvinia are ongoing in Dr. Bharat B. Aggarwal's lab in M.D. Anderson Cancer Center in Houston.

Li said his team is grateful for the strong support their research has received from SFA's Board of Regents and administration, the local community, and elected officials, including U.S. Sen. Kay Bailey Hutchison and U.S. Rep. Louie Gohmert. The National Center for Pharmaceutical Crops has received funds from the U.S. Department of Agriculture, Centers for Disease Control and Prevention, the Department of Education, SFA research development grants and private donations.

"I applaud Dr. Shiyou Li and his talented team of researchers and scientists for their innovative work right here in Texas to solve some of our country's most pressing scientific problems," Hutchison said.

"Under Dr. Li's leadership, the National Center for Pharmaceutical Crops at SFA has helped bring Texas to the forefront of medicinal plant research. Through their commitment to collaboration among a diverse range of fields from agriculture to biomedicine, they are achieving groundbreaking advancements in the treatment of many life-threatening diseases like cancer."

Li has developed the first high-yielding cultivar of anti-cancer Camptotheca and Trichome Management technology to induce drug production. Both the cultivar and the technology have been granted patents. In 2005, his team identified leaves of Sweetgum as a high-yielding alternative source for imported shikimic acid. A limited supply of shikimic acid is the main reason for the global shortage of the antiviral drug Tamiflu.

For more information about the NCPC at SFA, visit www.ncpc.sfasu.edu.