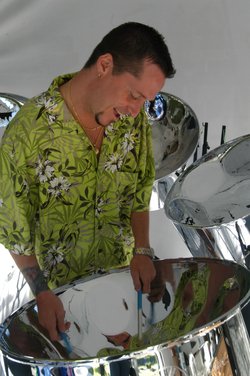 Guest musician Tracy Thornton will perform with the SFA Steel Band during the group's annual spring concert at 7:30 p.m. Tuesday, March 29, in Cole Concert Hall on the SFA campus.

The 10-member ensemble, directed by SFA Associate Professor of Percussion Scott Harris, performs on a full set of steel pans made from 55-gallon oil drums, and a large array of Latin percussion instruments. A four-piece horn section rounds out the band.

Thornton, who was the tenor pannist for the bands Been Caught Steelin' and Sons of Steel and serves as the music director of four steel drum bands, will perform both as a solo artist and with the SFA ensemble.

"The program includes two of Thornton's own compositions, 'In the Groove of Things' and 'Dain Bramage,'" said Harris. "Both pieces are highly energetic and have a strong rock influence."

"We are excited to have Tracy join us for this concert," Harris continued. "When we heard him at a festival in Waco last year, the whole band was blown away by his energetic playing. He will be spending two days with us, working with the band and giving lectures on the history of steel drums and how to build a career as a solo artist."

Pan Island, the Crandall High School steel band directed by SFA alumna Stephanie Shing, will open the concert. The band will return to the stage at the end of the program to join the SFA Steel Band and Thornton in performing the final three pieces, including "Cha-Cha Sandwich" and the popular Limbo dance.

"This promises to be one of the most exciting and energetic concerts of the season, so bring the whole family!" Harris exclaimed.