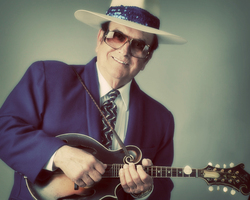 Grand Ole Opry member Bobby Osborne and his band, the Rocky Top X-Press, will be one of four groups and solo artists performing during the American Bluegrass Masters Tour concert to be presented as a part of the Stephen F. Austin State University College of Fine Arts' University Series at 7:30 p.m. Thursday, April 7, in W.M. Turner Auditorium.

The 15 musicians who will be picking, strumming and plucking their instruments and uniting their voices in close harmonies are some of the most highly regarded personalities in bluegrass music, explained Sylvia Bierschenk, director of SFA Arts Information.

"Here, on one stage, we'll have the great mandolin player and vocalist Bobby Osborne; two-time Grammy winner and guitarist Curtis Burch; and renowned banjo player Sammy Shelor, who is a four-time winner of the International Bluegrass Music Association's Banjo Player of the Year," Bierschenk continued.

The concert will open with the Dean Osborne Band and Curtis Burch, followed by Bobby Osborne and the Rocky Top X-Press.

The second half of the program will feature Curtis Burch as a solo artist, followed by The New South with special guest Sammy Shelor.

"We still have great seats available for this concert," said Diane J. Flynn, Fine Arts Box Office manager. "We encourage patrons to purchase their tickets ahead of time in order to avoid long lines on the night of the concert and to arrive early to allow for parking."