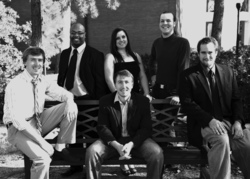 Tenor Joshua Dennis, of McKinney, received first place in the Edward Baird Singer of the Year Competition, a contest that recognizes singers whose artistry qualifies them for entry into professional careers.

His brother, Joseph, received first place in the graduate men's division and the Grady Harlan Award, a certificate given to the most promising professional voice selected from the first place winners in the senior and graduate divisions.

Patrick Taylor Russell, a baritone from Edinburg, received second place in the graduate men's division. Russell and the Dennis brothers are students of Bruce Fowler, assistant professor of voice.

"Every year our students go head-to-head with those from UNT, OU, SMU, Baylor, and other large programs in the region, and every year they fare extremely well," said LaGraff. "The voice faculty couldn't be more proud of their accomplishments."