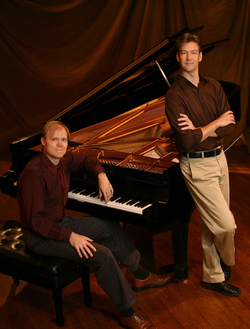 The recital will feature some of the "great pieces from the German song (or 'Lieder') repertoire," explained LaGraff.

Included on the program is Franz Schubert's "Erlkönig (The Erl-King)," a "tour-de-force for both performers because it is one of the most challenging songs for the pianist and requires the singer to portray four different characters," explained LaGraff.

"Hugo Wolf's 'Der Feuerreiter (The Fire-Rider),' is another powerful and challenging ballad we'll be performing," LaGraff continued. "It tells the story of a firefighter whose obsession leads to his own demise."

"Lush and beautiful, the music takes us on a journey from new love to love lost, through grief to acceptance," LaGraff said.
LaGraff, who joined the SFA faculty in 2004, is a veteran of the operatic, concert and recital stage. He has appeared with Tri-Cities Opera in Binghamtom, N.Y.; Opera East Texas; and the Syracuse, Tulsa, Pensacola, Westchester Hudson and Ithaca opera companies.

Hudson, who holds degrees in piano performance from the North Carolina School of the Arts, the Cincinnati College-Conservatory of Music and the University of Texas at Austin, has performed with singers from around the world, including alumni of the Bayreuth, Leipzig, Metropolitan, New York City and Nice Operas, and the National Opera of Prague.

LaGraff and Hudson have been collaborating since 2000, presenting recitals throughout the Midwest and South. In 2009 they released a recording of American song, "Songs by Stephen Lias, Michael Patterson and Lee Hoiby," on the Centaur Records label.

The recital is a joint presentation of the SFA College of Fine Arts and School of Music and is a part of the 2011-2012 Cole Performing Arts Series. Cole Concert Hall is located in the Wright Music Building, 2210 Alumni Drive.