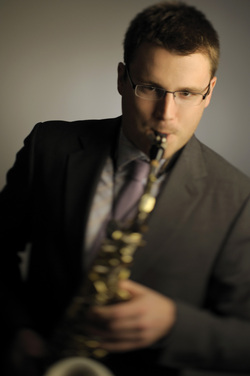 NACOGDOCHES, TEXAS - In celebration of the nation's diverse music, the SFA Wind Ensemble will open its 2011-2012 season with "Sounds of America" at 7:30 p.m. Tuesday, Oct. 11, in W.M. Turner Auditorium. The concert is presented as part of the Stephen F. Austin State University School of Music's Concert Series.

"Throughout the concert, the audience will hear sounds that reflect the vitality and energy of the people," said Fred J. Allen, SFA director of bands and of the ensemble.

A highlight of the program will be John Mackey's "Concerto for Soprano Sax and Wind Ensemble," featuring SFA Associate Professor of saxophone Nathan Nabb.

"This piece was written in 2007 and really shows off what the soprano sax can do," Allen explained.

The final work on the program will be "Flag of Stars" by British composer Gordon Jacob. It was written in the mid 1950s as a gift from "an inhabitant of the Old World to those of the New," according to the composer, and incorporates the Star Spangled Banner into its final movements.

The concert is a joint presentation of the SFA College of Fine Arts and School of Music. W.M. Turner Auditorium is located in the Griffith Fine Arts Building, 2222 Alumni Drive.