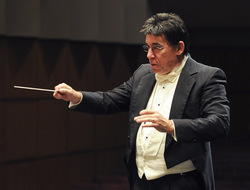 Dr. David W. Campo, associate director of bands at Stephen F. Austin State University, is one of the Louisiana composers whose work will be performed by the SFA Wind Symphony during its "Home Boys" concert at 7:30 p.m. Tuesday, April 19, in Cole Concert Hall on the SFA campus.

NACOGDOCHES, TEXAS - Music by Louisiana composers will be featured during "Home Boys," a concert by the Stephen F. Austin State University Wind Symphony at 7:30 p.m. Tuesday, April 19, in Cole Concert Hall on the SFA campus.

The concert will open with "Chansons Cadiennes" by Louisiana native David W. Campo, SFA associate director of bands and the Wind Symphony's conductor. The piece was commissioned by the University of Louisiana-Lafayette for its 1996 tour of France.

Also included in the first half of the program will be Keith Gates' "Introduction and Allegro," a piece Campo describes as a "moving tone portrait." Gates lived in Lake Charles, La., for a number of years while teaching at McNeese State University.

The second half of the concert will open with the world premiere of "Jubilee" by Campo's older brother, Robert Campo, who teaches at Baton Rouge Magnet High School and is a freelance trumpet player in the Baton Rouge and New Orleans areas. Robert will guest conduct his piece.

"To close the concert, the Wind Symphony will perform the monumental 'Symphony No. 2' by Shreveport native Frank Ticheli," said David Campo. "The symphony's three movements refer to different celestial lights-shooting stars, the moon, and the sun."