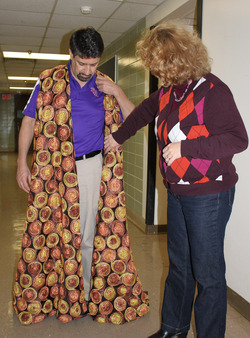 "It's full of laughs, fairies, magic, and even a little sword fighting!" said Weslaco senior Jonathan Garcia, who portrays Demetrius, one of the lovers.

"And its hilarious telling of an age-old story of unrequited love makes it relevant to just about everyone," explained Rusk senior Rachel Joseph, who plays Demetrius' love interest, Hermia.

For this particular production, the SFA actors are being directed by New York-based guest artist Chuck Hudson and sharing the stage with two veteran actors.

Hudson, a gymnast, mime and Paris-trained fencing master as well as director with credits in Italy, South Africa and throughout the United States, is mounting an unusually physical production with an accent on colorful visual elements, explained School of Theatre Director Scott Shattuck.

Visiting Assistant Professor David Studwell, an award-winning professional actor with 27 years of experience at leading theaters in New York, Chicago and other major cities, is cast as Oberon, King of the Fairies, and Professor Rick Jones, with more than 30 roles to his credit, portrays Hermia's father, Egeus,

Studwell said he loves this kind of collaboration with the students.
"It reminds me of the European master, journeyman, apprentice model-a tried and true system in which you learn by doing."

Longview senior Diedre Cantrell, who plays Oberon's wife, Titania, said she appreciates having both Jones and Studwell in the cast. "They bring that extra bit of professionalism and work ethic to the production, and they are great examples for the student actors to observe in terms of what will be expected of us once we enter the professional world."

"A Midsummer Night's Dream" is a joint presentation of the SFA College of Fine Arts, School of Theatre and University Series.

Prior to the opening night performance on Tuesday, Nov. 15, Hudson will give an informative talk at 7 p.m. in Griffith Gallery, located across the hall from Turner Auditorium. The audience is invited back to the gallery for a post-performance reception to meet the cast and honor the event's corporate sponsor, Tipton Ford-Lincoln.

Tickets are $18 for adults, $12 for seniors and $6 for students. For tickets or more information, please go to www.finearts.sfasu.edu or call (936) 468-6407 or (888) 240-ARTS. Patrons needing an assisted listening device during the performance may check one out through the Fine Arts Box Office.