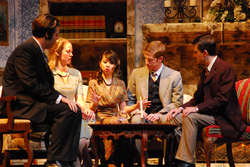 NACOGDOCHES, TEXAS - The Stephen F. Austin State University School of Theatre will close its 2011 summer season this week with the final performances of "The Uninvited" and "Schoolhouse Rock Live!" in W.M. Turner Auditorium on the SFA campus.

Tim Kelly's classic ghost story, "The Uninvited," which depicts the haunting of a seaside house in England, will close with a 7:30 p.m. performance on Tuesday, July 12. Based on a novel by Dorothy Macardle, the story follows a brother and sister who discover that their recently purchased dream home has a violent past.

"It wouldn't be a ghost story without some special effects, and 'The Uninvited' is no exception," said Rick Jones, SFA associate professor of theatre and the show's director.

"I'm not going to say exactly what happens-people will need to see for themselves-but I can tell you that a lot of different people with a lot of different skill-sets, from carpentry to electrics to computer graphics, contributed to the process. The result is a stage environment in which ghosts manifest themselves in different but unmistakable ways," Jones continued.

"Kids of all ages have been enjoying this family-friendly musical-even our college students. It's based on the educational cartoons that ran on Saturday morning television in the 1970s, '80s and '90s," said Scott Shattuck, director of the SFA School of Theatre and the musical.

"Seats are still available for our final performances, all of which are offered during daytime hours. It's a great opportunity for fun and learning indoors, out of the midsummer heat," Scott continued.