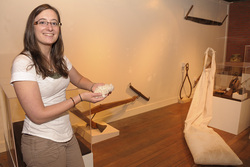 Cassandra Bennett of SFA's Stone Fort Museum holds cotton that is part of a new exhibit set to open later this month. The cotton is part of a collection of farming implements included in the exhibit called "Cornerstones of the Community: African American History in Eastern Texas." The public is invited to attend the opening of the exhibit at 4 p.m. Saturday, June 25.

NACOGDOCHES, Texas - A story quilt, lovingly stitched by a mother and her two daughters in the early 20th century, is included in a new exhibit opening this month at the Stone Fort Museum at Stephen F. Austin State University.

After five years of research, planning and collecting, "Cornerstones of the Community: African American History in Eastern Texas" will open at 4 p.m. Saturday, June 25. The public is invited to join the Stone Fort Museum staff and community partners in celebrating the opening of the exhibit - one of the first of its kind in East Texas.

The museum has collected artifacts, images and stories spanning parts of three centuries from Nacogdoches to the United Kingdom. In that timeframe, African Americans lived in Texas as subjects of the Spanish crown, the Republic of Mexico, the Texas Republic and the United States.

"Their stories are a part of the story of Texas, and this exhibit is designed to further our understanding of the roles they played in the development of the region," said museum director Carolyn Spears. "Each of the men and women featured in the exhibit exemplifies the universal desire for freedom, faith and family."

More than 17 community partners and 14 museums, archives and historical associations have contributed approximately 150 items to the exhibit. Items in the collection, such as family heirloom quilts and tools used by blacksmiths, lumbermen and cotton-field laborers, evoke powerful personal stories. A cast-iron bed from the 1870s, passed down for generations in the same family, highlights the large collection of home furnishings that comprises part of the exhibit.

"In addition to forging important partnerships between the museum and the local community, the exhibit has created new opportunities to donate artifacts to the museum's permanent collection," Spears said. "Without the help of our community partners and contributors, this exhibit would not have been impossible. The staff at the Stone Fort Museum extends its heartfelt thanks."

The exhibit opening will feature comments by retired educator and Daily Sentinel contributor Jeri Mills and entertainment by Steve Hartz and the Attoyac Valley String Ensemble. For questions, please contact the museum at (936) 468-2408 or by email at stonefort@sfasu.edu.