61st U.S. Secretary of State James A. Baker, III, to speak at SFA 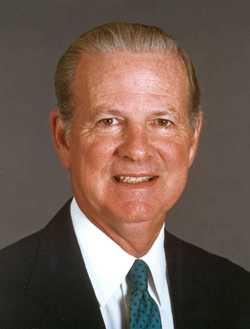 The Honorable James A. Baker, III, America's 61st secretary of state, will be the featured guest speaker at the 2012 Archie McDonald Speaker Series at Stephen F. Austin State University scheduled for 7:30 p.m. Thursday, April 12, in the Grand Ballroom of the Baker Pattillo Student Center.

The speaker series event is scheduled for 7:30 p.m. Thursday, April 12, in the Grand Ballroom of the Baker Pattillo Student Center on the SFA campus.

McDonald has taught history at SFA for 48 years and served as director of the East Texas Historical Association and editor of the association's journal for 37 years. He is a past president of the Texas State Historical Association, past vice chair of the Texas Historical Commission and author/editor of more than 20 books on historical topics. Along with teaching, McDonald currently serves as the SFA university/community liaison and is a weekly commentator on Red River Radio in Shreveport.