Dailey and Vincent bluegrass performance to ring in holiday season 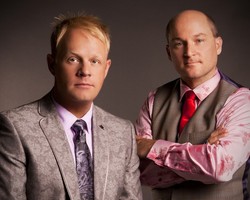 The SFA College of Fine Arts will present "Dailey & Vincent: A Bluegrass Christmas" at 7:30 p.m. Friday, Dec. 14, in W.M. Turner Auditorium in the Griffith Fine Arts Building on the SFA campus.

NACOGDOCHES, TEXAS - A blend of bluegrass-tinted holiday favorites will usher in the Christmas season when the Stephen F. Austin State University College of Fine Arts presents "Dailey & Vincent: A Bluegrass Christmas" at 7:30 p.m. Friday, Dec. 14, in W.M. Turner Auditorium in the Griffith Fine Arts Building on the SFA campus.

The performance by the musically acclaimed group that features Jamie Dailey and Darrin Vincent is part of the SFA College of Fine Arts 2012-2013 University Series, "Expressions."

With more than 30 music awards to its credit, the Dailey & Vincent partnership is one of the most applauded acts in the bluegrass community.

"Anyone who is a fan of bluegrass music is well aware of the kind of entertaining evening that is promised at a Dailey & Vincent performance," said John Goodall, associate dean of the SFA College of Fine Arts. "We're pleased to offer a show of this caliber in our University Series. It's going to be an enjoyable evening."

Their combined expertise, along with that of band members Jeff Parker, Christian Davis, B.J. Cherryholmes and Jessie Baker, has made Dailey & Vincent "an esteemed act," according to information at www.daileyandvincent.bombplates.com.

"A live Dailey & Vincent performance has something for every fan, featuring exceptional vocals, harmonized with an unexpected range of material and backed by the skillful musicianship for which bluegrass is known," the site says.

Before the performance, there will be an informative talk presented by Herbert Midgley, lecturer in the SFA School of Music, in the Griffith Gallery located across the hall from Turner Auditorium. The audience is invited back to the gallery for a post-performance reception to honor the event's corporate sponsor, Nacogdoches Medical Center.