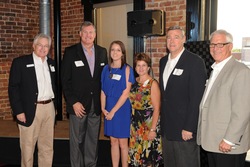 Also receiving special recognition was Regents Professor of Art William E. Arscott, who was presented with the Dean's Circle Lifetime Artistic Achievement Award for his work in cinematography.

Nacogdoches Mayor Roger Van Horn recognized program sponsors Cal-Tex Lumber Company, Nacogdoches Medical Center, Regions Bank, the law firm of Clardy Davis & Knowles, First Bank and Trust and Flashback Café. The Clardys were also presented with a gift for having opened up their home for the program, and Clardy was commended as having been elected as the new state representative representing Nacogdoches, Cherokee and Rusk counties.

The event also served as a fundraiser for the Dean's Circle with current and former students, faculty and supporters of the College of Fine Arts donating items for a silent auction.