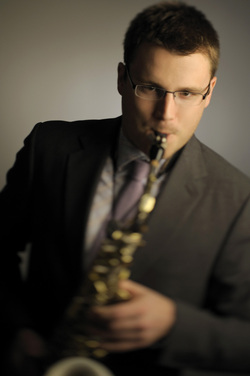 While explaining the recital's title, Nabb pointed out that the roots of the saxophone are French. "Adolphe Sax, though a native Belgian, promoted and manufactured this instrument after relocating to Paris. A great deal of the instrument's repertoire is by French composers or commissioned from foreign composers by French saxophonists. This program will highlight examples of both," Nabb continued.

Nabb said the Desenclos is particularly dear to him because his teacher, Frederick Hemke, won the Premiere Prix at the Paris Conservatoire with the piece. Hemke will be retiring at the end of this year after teaching at Northwestern University for 50 years.

Nabb and Hsieh will also perform Edison Denisov's "Sonate," which was written for legendary performer and pedagogue Jean-Marie Londeix, Nabb explained. "It is considered a milestone work because it is the first piece to command extended techniques such as slap-tongue, glissandi and multiphonics."

A member of the SFA music faculty since 2010, Nabb has performed across the United States and in Asia and Europe in solo, chamber and large ensemble settings with groups such as the St. Louis Symphony, New World Symphony and IRIS Chamber Orchestra. Most recently, he appeared with the Houston Symphony Orchestra.

His recording credits include his solo 2009 "Tangled Loops," a 2011 release by the Oasis Quartet for whom Nabb plays soprano saxophone, and the 2012 "LigAlien" by the Northshore Trio.

The recital is a joint presentation of the SFA College of Fine Arts and School of Music and a part of the 2011-2012 Cole Performing Arts Series.