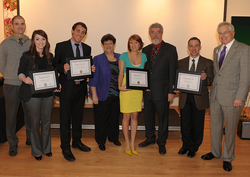 Grogan, who received the Ed and Gwen Cole Dean's Award in Art, transferred to SFA to pursue a Bachelor of Fine Arts with concentrations in printmaking and painting. Her work has been included in two student shows, "Prinstallation" in 2011 and "Pen, Pigment & Metal" in 2012.

Her name has been listed on the President's Honor Roll several semesters. Upon graduation, she plans to pursue a master's degree.

Hartke, the recipient of the George & Peggy Schmidbauer Dean's Award in Theatre, is pursuing a Bachelor of Fine Arts with an emphasis in stage management. She has served as stage manager for four SFA Mainstage productions and the 2011 Summer Repertory Season.

She is a member of the School of Honors; maintains a part-time job; and is a second-year member of Alpha Psi Omega, the National Theater Honor Society, for which she currently serves as secretary.

Weldon, who received the Dr. Robert G. Sidnell Memorial Dean's Award in Music Education, is placing his emphasis on choral music education. He sang the role of Dr. Grenvil in SFA's recent production of "La Traviata" and has also performed in four other SFA operas.

He tutors Music History through the SFA Academic Assistance Resource Center, and his recent research into the tradition of the African-American spiritual earned him recognition in SFA's Annual Undergraduate Research Conference.

Zinn, the recipient of the Jack and Naioma Ledbetter Dean's Award in Music, joined the ceremony through a Skype videocall from Hobart, Tasmania, where he is continuing with his music composition degree in an exchange program at the University of Tasmania.

While at SFA, Zinn has worked on the musical scores of two SFA films, had two compositions performed at the state conferences of the National Association of Composers and taught composition for SFA's Music Preparatory Division.

Himes said the focus of the annual Dean's Awards ceremony is inspiration. "It is about inspiring students with pride and self-confidence to pursue the ideal; for each of them to dream what the ideal is for them; and to inspire them to use this award to go about making that dream their reality."