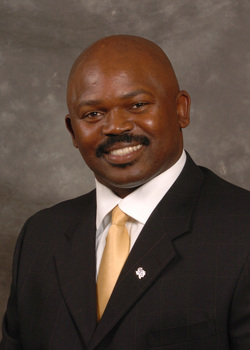 Melvin White, a Beaumont native, earned a bachelor's degree in business from SFA in 1986 after an outstanding four years on the Lumberjack football team. He worked for 12 years with Tracor, a defense contractor, and in 1998 established his own business, MRSW Management. He also is the founder and program director of Digital Workforce Academy, the Golden Triangle Empowerment Center and the Golden Triangle Business Incubator.

White resides in Pflugerville and is launching an international training effort in Liberia to help rebuild the country, which has experienced years of civil unrest.

A member of the SFA Board of Regents from 2005 to 2011, White was elected chairman of the board in 2010. He has served on the board of directors of the SFA Alumni Association and Athletic Letterman's Association. White was inducted into the SFA Football Hall of Fame in 2004.