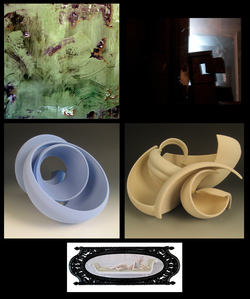 NACOGDOCHES, TEXAS - The School of Art at Stephen F. Austin State University has announced that works by four artists associated with the university will be included in "TEXAS NATIONAL 2012," which will open with a 6 to 8:30 p.m. reception Saturday, April 14, in the Ledbetter Gallery of The Cole Art Center @ The Old Opera House, located at 329 E. Main St. in downtown Nacogdoches. The show will run through Saturday, May 26.

Among the 109 pieces selected for the national juried exhibition are "Nautilus" and "Impulso," two ceramics pieces by graduate student Kira Kalondy of Mexico; and "Pearls Before the Hind," an oil painting by Cat Springs senior Heather Wobbe.

Also included in the show are "Through a glass darkly, the wonderful world of color: #86," a digital photo by SFA librarian Wade Carter; and "Untitled," an acrylic painting by Pearland resident Hannah Zuniga-Murasko, who earned her Bachelor of Fine Arts at SFA in 2007.

Created by the SFA School of Art, "TEXAS NATIONAL" is celebrating its 18th year on the national scene, said Charlene Rathburn, the university's director of galleries. The competition is open to all artists living and working in the United States and is juried each year by an internationally acclaimed artist or critic.

Works by 84 artists from 23 states were chosen from among the 1,600 entries for this year's exhibition, and cash prizes totaling $3,500 will be awarded to three artists during the show's opening from 6 to 8:30 p.m. Saturday, April 14.

World-renowned art critic Dave Hickey is serving as the juror for this year's event. He will announce the winners of the competition during the opening reception. Hickey will also give a lecture presentation from 5:30 to 6:30 p.m. Friday, April 13, in the Music Recital Hall of the Wright Music Building on the SFA campus.

Running concurrently with "TEXAS NATIONAL 2012" upstairs in the Reavley Gallery will be an exhibition curated by Hickey, "Stephen Mueller (1947-2011): In Memoriam."