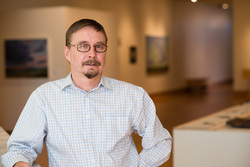 NACOGDOCHES, TEXAS - John Handley grew up in a family of artists - musicians especially.

"But my mother was, and is, a painter, so I was painting at a very early age," he said.

Handley, the new art galleries director for Stephen F. Austin State University's School of Art, said he has "never known life without art of some form or another."

"And in many ways, this is the primary lens in which I see the world," he said.

Beginning his new duties earlier this month, Handley has been busy meeting SFA faculty, students and staff, brainstorming with them and discussing future projects and exhibitions.

"My first duty as director is to ensure that we provide a wide variety of exhibitions on art of the highest caliber for the students of SFA," he said. "That is an important part of their education, and for not only the art students but for all SFA students."

But that focus does not exclude his desire to bring exhibitions to SFA galleries that would be of interest to the Nacogdoches community as a whole, he said, adding all gallery patrons benefit from distinctive exhibitions and programs.

"The Cole Art Center has a history of exhibiting local artists and working with local art groups, and this will certainly continue," Handley said. "We are also planning for the annual Art Walk downtown next month, and we have invited some of the art students to be here to present and sell their work and meet the public. It ought to be a great time and great exposure for these young artists."

A wealth of experience

Handley earned his undergraduate degree in studio art and art history from Western Washington University. During that time, he worked as a student intern at the Whactom Museum of History and Art and The Western Art Gallery. While earning his master's degree in museum studies from John F. Kennedy University, Handley worked at the Judah L. Magnes Museum in Berekley, during which time he worked on the preparation and delivery of 175 Judaica artifacts for the exhibition "Patterns of Jewish Life in the World" at the Martin Gropius Building in Berlin.

Handley returned to graduate studies in 2002, first in theology, ultimately completing his doctorate in art history and religion from the Graduate Theological Union in Berkeley.

"There, I had the wonderful opportunity to work with and be mentored by two luminaries in the field of art - Peter Selz and Jane Dillenberger," he said. "For the past few years, I have worked with Peter Selz on exhibitions and special projects at the Meridian Gallery in San Francisco, a nonprofit art center."

There, they launched "Patrick Graham: The Silence Becomes the Painting," which has just left Washington, D.C., and is now at Saint Louis University. Handley and Dillenberger recently co-authored "The Religious Art of Pablo Picasso," which is being published by the University of California Press and should be out next summer.

"I owe a great deal to these two individuals for how they have included me in their work," he said.

Early on in his doctoral work, Handley said he realized how much he enjoyed university settings.

"They differ in many ways from typical museums," he said, "because of the atmosphere of learning and the steady stream of students and faculty. I felt this was a better fit for me than perhaps a 'regular' museum setting, so I decided that once I had completed my degree, I would look for this type of position. There's just a different energy when there is a steady stream of students.

"What attracted me especially to SFA was that there are galleries both downtown and on campus - really the best of both worlds," Handley said.

Texas National in April is front and center for Handley.

"I look forward to working on an exhibition of that scale," he said.

He was equally thrilled when he learned last week that Selz had agreed to accept his offer to serve as juror for Texas National.

"But I am also looking forward to developing exhibitions with the faculty here," he said. "Everyone I have spoken with so far has excellent ideas. These will include a wide variety of media, from photography to painting, various forms of printmaking, and I hope a series of site-specific installations, including Day of the Dead Altars and folk art.

"With a facility like Cole Art Center, we have the ability to bring in a broad range of art," Handley said, "and that is my goal."

An opening reception for "The World of William Joyce" and "Todd Slater: The Art of Rock" will be from 6 to 8 p.m. Friday in the art center located at 329 E. Main St. in downtown Nacogdoches.

"The World of William Joyce" exhibition was organized by the National Center for Children's Illustrated Literature, Abilene, Texas. It features the paintings and drawings of the author and illustrator of more than 50 children's books. The other exhibition features the work of 2002 SFA graduate Todd Slater, who designs silkscreen posters for rock and roll band performances.

The exhibitions are presented by the SFA School of Art and are sponsored in part by the Nacogdoches Junior Forum and the SFA Friends of the Visual Arts. All exhibitions, receptions and gallery talks are free and open to the public.