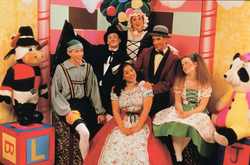 As part of the SFA College of Fine Arts' Children's Performing Art Series, the American Family Theater, Inc. will give two performances of "Babes in Toyland" on Tuesday Dec. 11, one at 9:30 a.m. and one at 12:30 p.m. Both performances will be held in W.M. Turner Auditorium in the Griffith Fine Arts Building.

NACOGDOCHES, TEXAS - East Texas children will "travel" to Toyland, a magical land filled with toys and treats, when they attend a performance of "Babes in Toyland" on Tuesday, Dec. 11, in W.M. Turner Auditorium in the Griffith Fine Arts Building on the Stephen F. Austin State University campus.

The two performances, one at 9:30 a.m. and one at 12:30 p.m., are presented by American Family Theater, Inc. and are part of the SFA College of Fine Arts' Children's Performing Arts Series.

Victor Herbert's captivating children's classic begins with the tinkle of a music box, and slowly, one by one, the characters come to life on stage. Alan, Mary, Widow Piper, Jack, Jill and Barnaby tell the story through dance in the amusing opening sequence.

The story begins in Widow Piper's garden, where Barnaby has arrived to collect Widow Piper's mortgage payments. The payments have been late, and when Mrs. Piper tells Barnaby that she cannot pay on time again this month, he makes a deal with her. Barnaby tells Widow Piper that he'll gladly forgive the payment if her daughter, Mary, agrees to marry him.

But Mary doesn't want to marry Barnaby. Her true love is Alan, Barnaby's nephew. Mary is despondent, telling Alan that there is no way out. She is almost resolved to her fate when Alan, Jack, Jill and the Widow Piper convince Mary that anything is possible if you really believe that it can happen.

The play targets children in kindergarten through sixth grade. Tickets are $6 for individuals and $5 per person for groups of 20 or more.