Houston mayor to speak at SFA 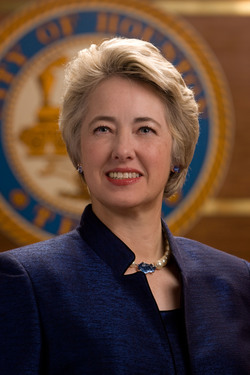 Houston Mayor Annise Parker will be the keynote speaker at the upcoming 2012 Georgiana and Max Lale Lecture at 7:30 p.m. Thursday, Sept. 27, in the Grand Ballroom of the Baker Pattillo Student Center on the SFA campus.

NACOGDOCHES, Texas - In conjunction with its 50th anniversary celebration, the East Texas Historical Association will host Houston Mayor Annise Parker as the keynote speaker at the upcoming 2012 Georgiana and Max Lale Lecture.

The lecture will begin at 7:30 p.m. Thursday, Sept. 27, in the Grand Ballroom of the Baker Pattillo Student Center on the Stephen F. Austin State University campus.

Parker is a second-generation native Houstonian and a graduate of Rice University. She worked for 20 years in the oil and gas industry, the last 18 with Mosbacher Energy Company.

She is the 61st mayor of Houston and one of only two women to hold the city's highest elected office. As Houston's chief executive officer, she is responsible for all aspects of the general management of the city and for the enforcement of all laws and ordinances. She has spent many years in service to the people of Houston, with six years as a city council member and six years as city controller. She is the only person in the city's history to hold the offices of council member, controller and mayor.

Parker has been the recipient of numerous awards during her career, including the 2011 Guardian of the Bay Award from the Galveston Bay Foundation, Scenic Houston's 2010 Scenic Visionary Award and the 2010 Guardian of the Human Spirit Award from the Holocaust Museum Houston. Along with her duties as mayor, Parker remains active in the community, currently serving on the boards of the Texas Environmental Research Consortium and Houston-Galveston Area Council. She also is an advisory board member of the Holocaust Museum, the Center for Houston's Future and the Montrose Counseling Center.

The Georgiana and Max Lale Lecture series was endowed through the beneficence of Max Sims Lale, an ardent participant in historical and preservation activities in East Texas. Lale was a World War II veteran who began a newspaper career after the war. He eventually became the publisher of the Marshall Herald-Banner, and later served as the manager of communications and publication for Thiokol Corporation. He was a fellow and past president of the East Texas Historical Association and a past president of the Texas State Historical Association. His historical pieces have appeared in publications such as "Southwestern Historical Quarterly," "East Texas Historical Journal" and "Red River Valley Historical Review."

Lale passed away in 2006, but the lecture series, established the following year, continues to honor his rich legacy.

The lecture is free to the public. For more information, contact the association at sosebeem@sfasu.edu or (936) 468-2407.