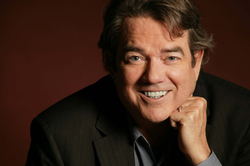 Legendary songwriter Jimmy Webb, best known for hits such as "By the Time I Get to Phoenix" and "MacArthur Park," will present an intimate concert of his songs at 7:30 p.m. Friday, Sept. 14, in W.M. Turner Auditorium as part of the Stephen F. Austin State University College of Fine Arts' University Series.

NACOGDOCHES, TEXAS - The songwriter behind mega hits such as "Wichita Lineman," "MacArthur Park" and "Galveston" is coming to Nacogdoches to share his incredible catalog of songs at 7:30 p.m. Friday, Sept. 14, in W.M. Turner Auditorium.

In his intimate one-man show, Webb will present songs from his 40-year career as a songwriter and recording artist. The concert is part of the Stephen F. Austin State University College of Fine Arts' University Series.

Webb is best known for his hits sung by artists such as Glen Campbell ("By the Time I Get to Phoenix," "Where's the Playground, Susie"), Richard Harris ("Didn't We"), the Fifth Dimension ("Up, Up and Away"), The Brooklyn Bridge ("The Worst That Could Happen"), Art Garfunkel ("All I Know"), Linda Ronstadt ("Easy for You to Say") and Joe Crocker ("The Moon's a Harsh Mistress").

According to American Songwriter magazine, Webb is "a prodigious performer, and a night with Jimmy at the keys is not unlike getting to hear George Gershwin or Cole Porter live. It's hard to believe one guy could have written all these amazing songs. Webb is still at it, thankfully, and if you get a chance to see him live, grab it. People ask why nobody writes songs like they used to. Fortunately for us all, Jimmy Webb still does."

In addition to writing for other artists, Webb is an acclaimed performer in his own right. During the 11-year period of 1970 to 1981, he produced six albums, and he continues to record. His latest CD, "Just Across the River," features duets with friends Billy Joel, Vince Gill, Willie Nelson, Jackson Browne and Glen Campbell.

Prior to the concert, there will be a 7 p.m. informative talk about Webb and his music in Griffith Gallery, located across the hall from Turner Auditorium. The audience is invited back to the gallery for a post-performance reception to meet Webb and honor the event's corporate sponsor Commercial Bank of Texas.