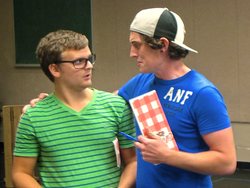 SFA sophomore Connor Clark, left, who plays Seymour, the florist that discovers the mysterious plant at the center of "Little Shop of Horrors," rehearses with junior ensemble member Cody Davids for the SFA production of the pop musical comedy that opens at 7:30 p.m. Oct. 9 in W.M. Turner Auditorium. The musical runs through Oct. 13.

NACOGDOCHES, TEXAS - The Stephen F. Austin State University College of Fine Arts and the Schools of Music and Theatre will present the pop musical "Little Shop of Horrors" Oct. 9 through 13 at 7:30 p.m. in W.M. Turner Auditorium as part of the 2012-2013 College of Fine Arts' University Series, "Expressions."

The musical - with book and lyrics by Howard Ashman and music by Alan Menken - tells the hilarious story of a timid florist and his mysterious plant that is part Venus flytrap, part serial killer and part rock star.

Because the School of Theatre and School of Music co-produce a major musical along with the College of Fine Arts on a biennial basis, selecting "Little Shop of Horrors," with its generational appeal, was considered a natural choice to be included in both the Mainstage Series and University Series, according to Scott Shattuck, director of the School of Theatre and of the production. Shattuck and Stephen Lias, SFA professor of music and the show's musical director, collaborated on the selection.

"We were looking for a title that would generate enthusiasm in large audiences of different generations - students as well as members of the Nacogdoches community," Shattuck said. "Of course, we are always looking for shows that provide excellent educational opportunities for our students, and "Little Shop" brings with it challenges -
a pastiche of pop music styles circa 1960, elaborate puppetry, and parody of both low-budget horror movies and big-budget musical comedies - that we haven't tackled in recent years."

Audiences typically love all aspects of "Little Shop of Horrors," Shattuck said, but a few of the songs, including the title number, the ballad "Somewhere That's Green," and the gospel-flavored "Suddenly Seymour," tend to be favorites. The trio of women that serves as both a Greek-style chorus and a lively "girl group" of backup singers reminiscent of the Crystals, the Chiffons and the Ronnettes often rival the principal characters for audiences' affection, Shattuck said.

"And the huge, hilarious, bloodthirsty, blues-rock singing plant is often described as the star of the show," Shattuck said.

"Personally, I love Alan Menken's rockin' music and the wonderfully witty way that the writer, Howard Ashman, plays with a variety of cultural references," he said, "especially early rock 'n' roll, classic films and B-movies, and musical theatre conventions from the sublime to the ridiculous."

Before the opening night's performance, there will be a 7 p.m. informative talk about the musical and puppetry presented by Dr. Alan Nielsen, professor emeritus in the SFA School the Theatre, in Griffith Gallery, located across the hall from Turner Auditorium. The audience is invited back to the gallery for a post-performance reception to meet the cast and to honor the event's corporate sponsor, Tipton Ford Lincoln.

Tickets are $18 for adults, $12 for seniors and $6 for students, with discounts available for seniors, faculty and staff, students and youth. For tickets or more information, visit www.finearts.sfasu.edu or call (936) 486-6407. Patrons needing an assisted listening device during the performance can check one out at the Box Office. This production is recommended for mature audiences, and details about audience suitability are available at www.finearts.sfasu.edu.