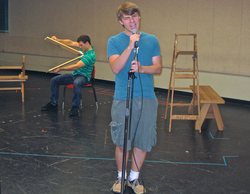 Sugar Land sophomore Daniel Miller practices the moves he will employ in a full-body puppet of the man-eating plant in "Little Shop of Horrors" while Pearland sophomore vocal performance major Jake Trapp, who speaks and sings the plant's role, rehearses one of the blues-rock songs of the pop hit musical presented by the SFA College of Fine Arts University Series at 7:30 p.m. Oct. 9 through 13 in W.M. Turner Auditorium.

NACOGDOCHES, TEXAS - The exceptional talent of the student performers and directing faculty in Stephen F. Austin State University's Schools of Theatre and Music will be showcased when "Little Shop of Horrors" takes center stage at 7:30 p.m. Oct. 9 through 13 in W.M. Turner Auditorium as part of the College of Fine Arts' University Series.

Even Scott Shattuck, director of the School of Theatre and of the upcoming production, was amazed at the artistry that the auditions for the musical brought forth.

"I was flabbergasted at the amount of talent that emerged at auditions for this production," Shattuck said. "We had our pick of a startling number of red-hot singers, and this small cast is going to blow the roof off of Turner Auditorium.

"The usual reaction of someone who comes to one of our productions for the first time is amazement at the level of quality and professionalism they see on stage," he said. "I hope that lots of new audience members try us out with 'Little Shop,' because I think that response will be stronger than ever."

" … as well as a wonderful cast and staff of SFA students," Shattuck said.

"The whole show looks fabulous, but that hilarious and terrifying plant is literally at the center of everything," Shattuck said, "so we're sparing no effort to make it the most dazzling flora to hit Nacogdoches since the Ruby Mize Azalea Garden."

Faithful SFA audiences will see Houston senior Kurt Bilanoski, who had noted performances in "Almost Main" and "How I Became a Pirate," and Flower Mound senior Kyla Williams, known for her performance in "Schoolhouse Rock Live," among other productions, returning to the main stage in key supporting roles. The leading characters, Seymour and his beloved Audrey, are played by sophomore theatre majors that may be less familiar: Connor Clark of Mesquite and Allison Day of San Antonio. A few students that have just arrived at SFA, junior college transfers Michael Spencer of Grapevine and Cody Davids of Magnolia, international exchange students Melissa Brown-Taylor of London and Ingunn Kristjansdottir of Iceland and Friendswood freshman Anna Drake, round out the cast along with sophomores Courtney Cole ("Steel Magnolias") of Kennard and Nick Pinelli ("Rabbit Hole") of The Woodlands.

"The greatest joy of directing this production is the opportunity to collaborate with so many brilliant artist-colleagues as well as our talented students," Shattuck said. "That's also the biggest challenge: a musical is a very complex undertaking, and it's my job to try to connect the dots among all the different elements."

Tickets are $18 for adults, $12 for seniors and $6 for students, with discounts available for faculty and staff. For tickets or more information, visit www.finearts.sfasu.edu or call (936) 486-6407. Patrons needing an assisted listening device during the performance can check one out at the Box Office. This production is recommended for mature audiences, and details about audience suitability are available at www.theatre.sfasu.edu.