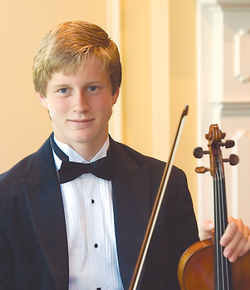 Violinist Payton Andrews, son of Reese and Carolyn Andrews and a student in the SFA Music Preparatory Division, recently performed in the All-State Philharmonic Orchestra as concertmaster.

This is the third year for Andrews to have been chosen as one of only 112 violin students in the state to perform in one of the three All-State Orchestras, but this is the first year he has been selected as a concertmaster.

"This is a very exciting accomplishment for Payton," exclaimed Dr. Jennifer Dalmas, SFA professor of violin and Andrews' instructor. "It's an honor to win the top chair of any orchestra; to do so at the All-State level is really extraordinary!"

Andrews has been enrolled in the Stephen F. Austin State University Music Preparatory Division since 2000 when he began studying Suzuki violin with Brenda Josephsen. Dalmas has been his instructor since 2005.

For six consecutive years, Dalmas' students from the Music Preparatory Division have been named to an All-State Orchestra. Laura Nicholson of Tyler performed with this year's Symphony Orchestra, Payton's brother Parker earned spots in the 2007, 2008 and 2009 orchestras, and Jason Williams of Lufkin also performed in 2009.

This year's All-State musicians have each received further recognition. Andrews recently competed in Dallas as a semi-finalist in the Juanita Miller competition, and Nicholson performed the first movement of the Mendelssohn concerto in Tyler with the Tyler Youth Orchestra.

"Our string players in the Prep Division are distinguishing themselves all across Texas!" Dalmas said.

The SFA Music Preparatory Division offers group and private lessons in Suzuki violin or viola for ages 3 and up and private instruction in traditional violin, viola and cello for ages 7 and up, including adults.

For information on the string program or any other musical instructions offered through the SFA Music Preparatory Division, visit www.music.sfasu.edu/prep, e-mail Pat Barnett, division director, at pbarnett@sfasu.edu or call her at (936) 468-1291.