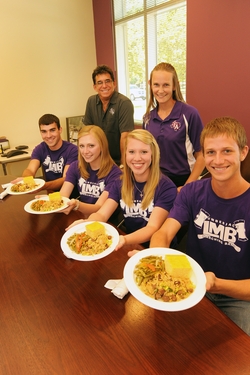 Tickets for Cajun-themed to-go dinners will be sold for $10 each through Thursday, Nov 1, and will be available for drive-through pick up from 5 to 7 p.m. Friday, Nov. 9, on Vista Drive west of the student center. The meals will be prepared by ARAMARK, SFA's food-service partner, and will consist of Cajun chicken and sausage jambalaya, green beans, cornbread, hot sauce and a chocolate chip cookie.

Proceeds from the fundraiser will be used to support the band's upcoming trip to the United Kingdom, where the group will lead the 2013 London New Year's Day Parade. Approximately 150 SFA band members are expected to participate in the 27th annual parade, which is watched by more than 600,000 spectators and televised to 280 million people around the world. More than 20 different countries will be represented in the parade and associated concert performances.

To purchase tickets for the fundraising dinner, please contact the band office at (936) 468-4702.