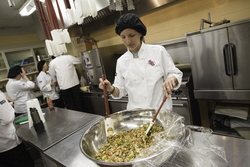 At the student-run SFA Culinary Café, unique three-course lunches are prepared and served for $10. Meals are offered on Tuesdays and Thursdays to a full house of guests from the campus community and the general public.

Students in SFA'S hospitality administration program in the School of Human Sciences are learning that serving gourmet fare involves much more than just putting food on the table.

While operating the popular SFA Culinary Café, the students select themes, plan and prepare meals, and serve them to hungry patrons at $10 a seat. Meals are served on Tuesdays and Thursdays to a full house of guests from the campus community and the general public.

Chef instructor Todd Barrios knows his way around a kitchen, having previously served as a certified executive chef for a country club in Baton Rouge, La. Certified by the American Culinary Association, he also spent six years in restaurant management, coming to SFA by way of Northwestern State University where he taught culinary arts.

"I benefited so much from this class," said Sloane Meadows, a hospitality major who plans to graduate in May. "My goal is to be a hotel banquet manager. This class taught me to think for myself. When we prepared food, Chef Barrios encouraged us to be aware of our own senses. He was there if we needed help, but when we'd taste a dish, he would ask us what it needed."

The Culinary Café is a three-class collaboration. Barrios' hospitality students work the "back of the house" - menu development, food preparation, promotion and ticket sales, etc. Students in Dr. Chay Runnels' Customer Relations for the Hospitality Industry class work the "front of the house," focusing on what the guests see in a restaurant, including hosts, hostesses, servers and bussers. Leisha Bridwell instructs Accessories in Interiors students in assembling the floral centerpieces for the tables.

The meals comprise three courses and center on student-chosen themes such as Asian, Cajun, country cooking, Creole, Latin, Mediterranean, nouvelle vegetarian and Texas barbecue. Seating is available for up to 50 guests, so students learn to plan and execute large-quantity food production.

"Themes are chosen so students learn to concentrate on flavors within the theme while using the ingredients in unique ways," Barrios said. "We want our patrons to have a dining experience they can't get anywhere else in town."

Ryan Russell, a May 2012 SFA hospitality administration graduate, said the class helped prepare him for his career. "I love Southern food and would someday like to own my own restaurant," he said. "The restaurant business is fun but also very hectic. I learned how important it is to manage my time and plan ahead. This was the most beneficial class I took."

According to Barrios, students also learn about desirable menu progression, for example, starting with a heavy appetizer and finishing with a lighter dessert. In addition, while preparing meals for up to 50, as much of the warm cuisine as possible must be prepared ahead and held on a steam table until ready to be plated. Students are schooled on which foods hold up best in these conditions and which are the most easily served.

Guests are seated promptly at noon, and service runs until 1 p.m. The Culinary Café is located on the south side of campus in a building that formerly housed the Early Childhood Lab.

The cost of food items also plays a major role in what selections the students prepare, Barrios said.
"With a budget of only $10 per person, we have to be mindful that steak and seafood can be very expensive. We strive to give the perception of a $30 meal," Barrios said. "The students learn to be creative with their choices and recipes."

Barrios said there are plans to showcase student work on the dining room walls by displaying trend boards developed by fashion-merchandising students and sketches by students in the interior design program.

"Our goal is to teach students and promote their accomplishments," Barrios said. "The comments we are getting tell us our patrons are excited and impressed with the meals and service, and the experience our students are receiving is invaluable."