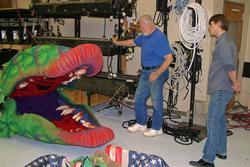 SFA professor emeritus Alan Nielsen directs the largest of four "Audrey II" puppets (with student puppeteer and Sugar Land sophomore Daniel Miller inside) as Pearland sophomore Jake Trapp, who gives voice to the man-eating plant at the center of "Little Shop of Horrors," looks on. The show plays at 7:30 p.m. Tuesday through Saturday, Oct. 9 through 13, in W.M. Turner Auditorium on the SFA campus.

NACOGDOCHES, TEXAS - There's probably no better or more logical person to direct the complex puppetry in the Stephen F. Austin State University College of Fine Arts and Schools of Theatre and Music's production of "Little Shop of Horrors" than Alan Nielsen.

The professor emeritus in SFA's School of Theatre has been an actor, teacher, composer and director, but it all started with a puppet horse named Flash.

Nielsen was a full-time student at the University of Nebraska-Lincoln and working with the Nebraska Repertory Theatre while he manned the puppet Flash the Horse for a morning children's show, "Cartoon Corral," in Lincoln in the early 1970s.

"I worked my way through grad school as a professional puppeteer," Nielsen said.

'Flash' forward some 38 years, past earning his doctorate in theatre arts, followed by writing, composing and arranging for theatre companies across the nation and beyond the more than two decades of teaching in SFA's School of Theatre and his work with the Original Cast, and Nielsen finds himself emerging briefly out of retirement and back in Turner Auditorium in the company of the students he enjoys.

"It's nice to be in the rehearsal room again," he said. "The cast is very good; their work is good."

"My concentration is on the puppet," he said, "which is nice, because I don't have to worry about all the other actors or anything else. But it has been a lot of fun working with students again, because that was always the fun part of the job."

"Little Shop of Horrors" - with book and lyrics by Howard Ashman and music by Alan Menken - tells the hilarious story of a timid florist, Seymour, who discovers a unique plant that's part Venus flytrap, part rock star and part serial killer. The plant - Audrey II - goes from "being a small plant in a pot to this huge 'Jabba the Hut' kind of character who dominates the stage," Nielsen said.

Nielsen is coaching the students in basic principles of puppetry, which starts with simply learning the correct way to open the puppet's mouth. Most people who first being working with a puppet as it talks, Nielsen explained, will "talk with the mouth closing instead of opening," he said. Effectively guiding where the puppet looks so that the audience is convinced it is alive and real on stage is also part of the training.

"The actor doing the voice is backstage, providing the subtext, the emotion, the fine-tuning, the expression of the character, but they have to work together," he said. "It's a very physically demanding thing."

The challenge, Nielsen said, "is to make this huge plant have a personality and find ways of bringing it to life."

"But that's always the challenge with puppetry, because you are limited in what you can use," he said. "Therefore, you learn how to make the most out of the least.

"Just the slightest move of a puppet can mean something," he said. "As an actor, that really helps you, because you don't really have to do all this emoting. You can do it simply and cleanly and still communicate."

Nielsen enjoys watching students grow in their respective roles and, as they do, having fun. But another challenge is making sure the students understand the culture of the 1950s, in which "Little Shop of Horrors" is set.

"But that's another wonderful thing about theatre and working with students," he said. "It's always the teachable moment. There's so much more to it than just the play that you are putting on; you are recreating a world that is lost to them."

Nielsen will present an informative talk on puppetry at 7 p.m. Tuesday, Oct. 9, in Griffith Gallery, located in the Griffith Fine Arts Building across the hall from W.M. Turner Auditorium, prior to the opening of the production.

"Little Shop of Horrors" will be performed at 7:30 p.m. Oct. 9 through 13 in W.M. Turner Auditorium as part of the University Series, "Expressions." Tickets are $18 for adults, $12 for seniors and $6 for students. For tickets or more information, visit www.finearts.sfasu.edu or call (936) 486-6407. Patrons needing an assisted listening device during the performance can check one out at the Box Office. This production is recommended for mature audiences, and details about audience suitability are available at www.theatre.sfasu.edu.