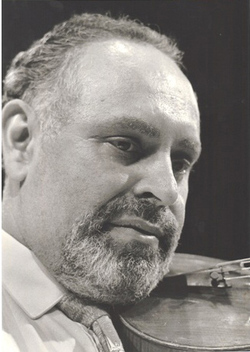 Dr. Isidor Saslav, former director of strings at Stephen F. Austin State University, will be honored at the Isidor Saslav String Scholarship Benefit Concert at 7:30 p.m. Saturday, March 31, in Cole Concert Hall on the SFA campus. Performing with Saslav on a varied program will be acclaimed musicians from across the United States who were his classmates, fellow musicians, directors and students.

NACGODOCHES, TEXAS - They studied with or under him, used to perform or currently perform beside him, and have directed or were directed by him.

Regardless of how they know him, the acclaimed musicians are coming from across the United States to perform with Dr. Isidor Saslav, former director of strings at Stephen F. Austin State University, in a benefit concert at 7:30 p.m. Saturday, March 31, in Cole Concert Hall on the SFA campus.

The purpose of the concert is two-fold, explained Jackie Warthan, member of the SFA Friends of Music and co-chair of the event. "We wish to honor Dr. Saslav and to raise money for the Isidor Saslav String Scholarship, which will help continue the superb strings program he was so instrumental in forming at SFA."

Cellists include Evan Drachman, founder and artistic director of the Piatigorsky Foundation who has frequently performed at SFA; and Daniel Levine, a 40-year member of the Dallas Symphony who was Saslav's classmate at Cass Technical High School, Wayne State University and the Chatauqua Music Festival in the 1950s.

Among the acclaimed pianists will be Richard Dowling, recording artist, scholarly editor and owner of Dowling Music; and Robert Freeman, former director of the Eastman School of Music and the New England Conservatory of Music, and former dean of the College of Fine Arts and current professor of musicology at the University of Texas at Austin.

The program is arranged by composers and features works such as J.S. Bach's Brandenburg Concerto, Felix Mendelssohn's Trio in D Minor, Op. 49, and Antonio Vivaldi's Concerto for four violins and orchestra.

Immediately following the concert, the Friends of Music will host a reception in the foyer for all audience members and the performers.

"This will be a wonderful chance to honor Dr. Saslav and meet the other performers," said co-chair Camille Bolinger.

Individual tickets are $25 each. Patrons can also choose to make a contribution of any amount towards the scholarship.