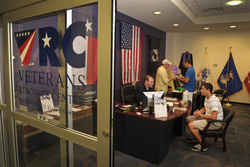 SFA's nearly 300 military veterans and their dependents are now being served by the new Veterans Resource Center that opened last spring in the Baker Pattillo Student Center.

To better meet the unique needs of students who have served in the military, SFA has established an on-campus Veterans Resource Center that brings opportunities for guidance, networking, studying and recreation together under one roof.

Veterans and their dependents visiting the new VRC will find information about academic advising, Web resources, disability and health services, counseling and career assistance. They also will have free access to computers and printers, quiet study areas, and a lounge for watching movies and playing video games on a 70-inch flat screen TV.

Criminal justice major and Palestine native Brian Bailey said he began spending his breaks between classes in the VRC as soon as the center opened last spring.

"It's a quiet, comfortable atmosphere with good conversation from like-minded individuals," said Bailey, who served in the U.S. Navy from 2003 to 2009.

He says he considers the facility to be a true resource center, adding that if he has trouble with his GI Bill or a problem with a class, there is a strong likelihood that someone else at the center can relate and offer solutions.

"Being able to come to the VRC and get help with my path through the university and encouragement to succeed at SFA is truly a blessing," he said. "We have folks from every military branch, and we're able to relate to one another while we take a breather during the day."

The VRC is committed to providing the best possible resources for veterans and their dependents, said Dr. Charles Lopez, assistant dean of student affairs for support services. Additional services, including scholarships and a bridge loan program, will be added soon.

Because of the VRC and other efforts across campus to support military veterans and their dependents, SFA has been recognized as a Principles of Excellence School by the U.S. Department of Veterans Affairs.

The VRC is an outgrowth of Lopez' 2009 doctoral dissertation, which focused on the unique needs of men and women enrolling at SFA following their military service.

"My research was an in-depth look at who the SFA veterans were and the impact of affordability and accessibility on their academic success," Lopez said. "I found that veterans wanted a place where they could meet with other veterans to talk about issues related to their needs and to hang out with one another."

Lopez reached out to U.S. Army veteran and SFA graduate student John Fontenot, and the two began to bring enrolled veterans together to discuss their needs and to help make the idea of the VRC a reality.

Three years later, the VRC opened its doors in March 2012. The center is located on the first floor of the Baker Pattillo Student Center, easily accessible for the nearly 300 military veterans and their dependents currently attending SFA.

"The VRC, to me, is a place that like-minded veterans can gather, socialize and form positive relationships that otherwise would not happen," said Fontenot, who now serves as coordinator for the VRC. "Veterans, for the most part, keep to themselves on campus because they don't have much in common with the regular student body. They commute to school, live off campus, have families to support and have jobs."

Leaving the military and resuming civilian life is not always easy, Fontenot said, and the additional stresses of college can make the transition even more challenging.

"Military veterans come to SFA much different than a young student fresh out of high school. They are older, well-traveled, many will have seen combat, and many will carry visible and invisible injuries or disabilities," Fontenot said.

Long-term goals for the center include providing a veteran counselor and creating therapeutic programs focusing on health, wellness and mentorship.

"Our ultimate goal is to get them to the graduation stage wearing the SFA veteran graduation stole and a huge Lumberjack smile," Fontenot said. "In my estimation, with a mid-sized student body and the cozy layout of the campus, SFA is the best university in the state of Texas for returning veterans."