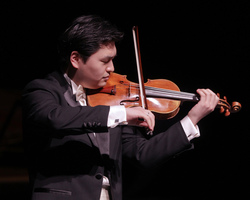 NACOGDOCHES, TEXAS - Ying Fu, winner of the 2011 Schmidbauer International Young Artist Competition at Stephen F. Austin State University, will be the featured soloist during the Orchestra of the Pines concert, "And the Winner Is!," at 7:30 p.m. Tuesday, April 3, in Cole Concert Hall.

Fu and the orchestra will perform Jean Sibelius' Violin Concerto in D minor, Op. 47, which Gene H. Moon, the ensemble's music director, calls "a stoic work that demands maturity, technique and sensitivity by both the soloist and orchestra."

Born in Shanghai, China, Fu is currently a doctoral student of Professor Cho-Liang Lin and Sergiu Luca at the Shepherd School of Music, Rice University, where he also earned his master's degree. He earned his Bachelor of Music from the Shanghai Conservatory of Music in China.

In 2011, in addition to winning the Schmidbauer competition, Fu swept the 27th Young Texas Artists Music Competition by winning the violin division, the Audience Choice Award and the Grand Prize. He has also won the Shepherd School concerto competition and the 2007 Tuesday Musical Club Young Artist Competition.

Fu joined the Cleveland Orchestra as a first violin this past fall.

The Orchestra of the Pines will also present Claude Debussy's L'Aprés-midi d'un Faune ("Prelude to the Afternoon of the Faun"), one of the most well-regarded musical works of the Impressionistic period, according to Moon.

Rounding out the program is Ludwig van Beethoven's Symphony No. 8 in F major, Op. 93.

"Of all nine symphonies by Beethoven, his eighth stands out as a strong representation of his classical roots and traditional adherence to form and harmony," Moon said.

The concert is a joint presentation of the SFA College of Fine Arts, School of Music and the Orchestra Series. It is sponsored in part by Nacogdoches Memorial Hospital and the Wedgeworth-Wright Endowment for the Arts.