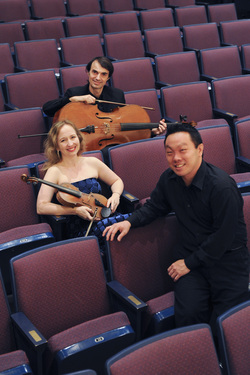 Gene Moon, director of orchestral studies at Stephen F. Austin State University and director of SFA's Orchestra of the Pines, Jennifer Dalmas, associate professor of violin and viola, and Evgeni Raychev, instructor of cello, will be the featured soloists when Orchestra of the Pines presents "Musical Trinity" at 7:30 p.m. Tuesday, Nov. 13, in Cole Concert Hall on the SFA campus.

NACOGDOCHES, TEXAS - The Orchestra of the Pines, Stephen F. Austin State University's flagship orchestral ensemble, will continue its "Season of Firsts" by presenting the program "Musical Trinity" at 7:30 p.m. Tuesday, Nov. 13, in Cole Concert Hall in the Wright Music Building on the SFA campus.

"Since my arrival to SFA, I have longed to join the stage with our string faculty to perform one of Beethoven's most popular concerti - his Triple Concerto for violin, cello, piano and orchestra," Moon said. "The trio of soloists is a fitting tribute to the title."

In a unique twist of events, a different conductor will conduct each work. Moon will be at the piano for the Beethoven work while Fred Allen joins the orchestra as maestro. Justin Allen, who has been studying conducting with Fred Allen since the previous academic year, will take the podium to conduct the Verdi piece.

"This semester, Justin has been studying orchestral conducting with me," Moon said. "He has great promise in the field of conducting, and, as a testament to his abilities, Mr. Allen and I felt it fitting to give Justin a moment in the spotlight with the orchestra. This is a rare occasion for any graduate student and one that Justin will remember for a long time."

For the Tchaikovsky symphony, Moon will return to the podium to resume his duties as conductor.

"Of Tchaikovsky's six symphonies, his second is considered the smallest, yet it is packed with perhaps some of the most memorable tunes," Moon said. "Dubbed the 'Little Russian,' Tchaikovsky takes Russian folk melodies and interweaves them amongst harmonies that create rich tapestries of musical line."