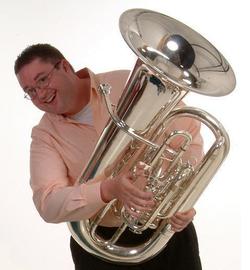 "Many universities and conservatories present several different recitals and concerts featuring the tuba and euphonium during this month," Salas said.

Combest, the newest principal tubist for the Louisville Symphony, has recently moved from a teaching position at the University of Texas at San Antonio, and he performs with the UTSA Faculty Brass Quintet. He has presented recitals and masterclasses as a guest artist and clinician at various universities throughout the United States. Combest's recital at SFA will feature music for tuba and piano by the popular film composer John Williams of "Star Wars," "Return of the Jedi" and "Superman" fame. Williams' "Tuba Concert" will be performed.

"This composition by John Williams has been added to tuba repertoire with great excitement," Salas said. "Premiered by Chester Schmitz of the Boston Pops Symphony, the piece includes several different nods to the film score compositions of John Williams."

"Jabba the Hut," also by Williams, was originally a small section of the movie score for "Star Wars" in which the tuba is used to portray the character of Jabba The Hut, Salas said. The composer expanded the section into a full work at the request of James Self, who has recorded the tuba music in several of Williams' movie scores.

Combest's recital is the first of four events associated with Octubafest. There will be two studio recitals and the final event - Tubaween - which will feature the SFA Tuba-Euphonium Ensemble at 7:30 p.m. Oct. 31, Halloween night, in Cole Concert Hall.