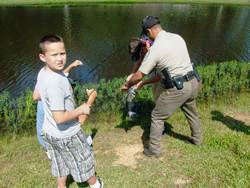 Game Warden Johnny Jones assists a student in bringing in a fish.

Along with 78 students, parents and grandparents, game wardens, park rangers, and a host of friends and volunteers from the San Augustine Lions Club, Rotary Club and the Powelltown Volunteer Fire Department participated in the May 1 event.

According to David Treadaway, conservation center director, the KidFish program is hosted in conjunction with Texas Parks and Wildlife game wardens from the area. "We could not have accomplished it without TPW loaning us rods and reels, local business contributions and the wonderful group of volunteers that came out to assist these kids," he said.

The day began with a series of short classes that taught casting, fish identification and safety. Barbless hooks and worms were used to catch the bounty of fish but all were re-released back into the lake to be caught again at a later time.

"The whole day was not only a learning experience for each child, but it was a field trip that 100 percent participated in and enjoyed," said Shane McGown, Broaddus I.S.D. superintendent.

The idea for a local KidFish program began with San Augustine Game Warden Johnny Jones. After mentioning the need to Treadaway, they began to recruit outside sponsors to assist in purchasing prizes, food and equipment.

"Kenny Fowler and Nell McBride of First Bank and Trust in San Augustine were the first to offer assistance to the program, and they were quickly followed by San Augustine's Lions Club and Rotary Club," Treadaway said.

Because of a special gift from the Shelby County Bass Club, each student received a new Zebco 202 rod and reel. In addition to a hot-dog lunch, participants won door prizes that included T-shirts, tackle boxes, backpacks and other donated items.

San Augustine Elementary School Principal Zachary Weems said the KidFish program was an excellent reward for the students, who had completed the state's STAAR testing. "They were really looking forward to a day outdoors, catching a few fish and being out of the classroom," Weems said.