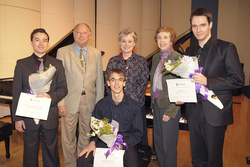 NACOGDOCHES, TEXAS - The Stephen F. Austin State University School of Music has announced the winners of the 2012 Schmidbauer International Young Artist Piano Competition held Jan. 21 through 22 on the university campus. From the pool of international applicants, 10 semi-finalists in both the Senior Division (ages 19 to 27) and Junior Division (ages 15 to 18) were selected to compete in the two-day event.

Andreas Ioannides, a graduate student at the University of North Texas, was awarded the $5,000 first prize in the Senior Division. The native of Cyprus will receive an additional $2,500 when he returns to SFA next year to perform Johannes Brahms' Piano Concerto No. 1 in D minor with the Orchestra of the Pines.

In the Junior Division, Auburn Lee of Pearland won the $1,500 first prize; Danni Feng, a student at the University of Michigan, won the $1,000 second prize; and Sangwon Kim of Seoul, South Korea, won the $750 third prize.

Senior Division jurors were Elisabeth Pridonoff, faculty member of the Brevard Festival; and Barry Snyder and Nelita True, both professors of piano at the Eastman School of Music.

Junior Division jurors were Constance Carroll, who has taught at universities in Louisiana, Wisconsin and North Carolina; Amy I-Lin Cheng, a faculty member at the University of Michigan; and Michael Gurt, the Paula Garvey Manship Distinguished Professor of Piano at Louisiana State University.

The Schmidbauer competition, which is made possible by the generosity of George and Peggy Schmidbauer, alternates annually between piano and strings.