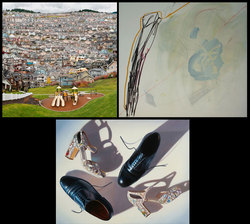 NACOGDOCHES, TEXAS - At the April 14 opening of "Texas National 2012," juror Dave Hickey announced the winners of the annual exhibition presented by the Stephen F. Austin State University School of Art.

Eric Tomerblin of Weaverville, N.C., received First Place for his inkjet print "Garden of Earthly Delights"; Elizabeth Barlow of San Francisco received Second Place for her oil on linen "Portrait of a Romance"; and Michael Blair of Denton received Third Place for his mixed media on canvas "Untitled 3-2."

Now in its 18th year on the national scene, "Texas National" is open to all artists living and working in the United States. This year's show includes 109 works by 84 artists from 23 states, chosen from over 1,600 entries.

"Texas National 2012" is being exhibited in the Ledbetter Gallery, and a show curated by Hickey, "Stephen Mueller (1947-2011): In Memoriam," is on display in the Reavley Gallery. Both shows run through Saturday, May 26, at The Cole Art Center @ The Old Opera House, located at 329 E. Main St. in downtown Nacogdoches. Gallery hours are 12:30 to 5 p.m., Tuesday through Friday, and 10 a.m. to 5 p.m. on Saturday. Admission is free.