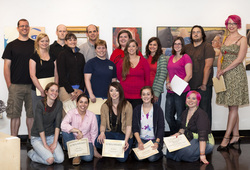 Michelle Smith, president of the SFA Friends of the Visual Arts, announced the recipients of that organization's scholarships and grants.