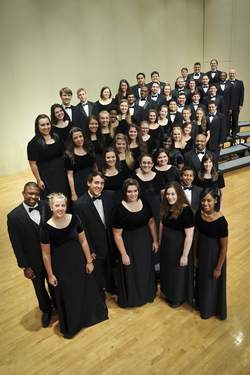 SFA's A Cappella Choir will perform its fall concert at 7:30 p.m. Thursday, Oct. 25, in Cole Concert Hall as part of the SFA College of Fine Arts and the School of Music's Concert Series.

NACOGDOCHES, TEXAS - An early work of modern English composer John Rutter will be the centerpiece of the Stephen F. Austin State University A Cappella Choir's fall concert at 7:30 p.m. Thursday, Oct. 25, in Cole Concert Hall on the SFA campus.

The performance - the choir's first of the academic year - is part of the SFA College of Fine Arts and the School of Music's Concert Series.

"This is not only the first concert of the year for A Cappella," SFA Director of Choral Activities Tim King said, "but it is also the first concert after our return from a most successful tour of Austria and the Czech Republic."

Rutter's "The Falcon" will be the focal point of the concert, according to King.

"The text for this three-movement work is based on Biblical and medieval sources that form a progression from the implied violence of the opening Psalm to the hope of peace from the book of Revelation," he said. "This work will feature members of the SFA voice faculty and a children's choir comprised of students from McMichael Middle School and our own SFA Preparatory Choir."

"This song is an experiment in spatial sound effects," King said.