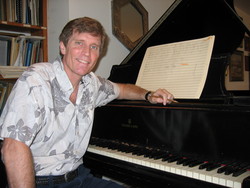 The work of acclaimed composer Frank Ticheli will be featured in the SFA Wind Ensemble's "The Music of Frank Ticheli" at 7:30 p.m. Tuesday, Oct. 16, in W.M. Turner Auditorium on the campus of Stephen F. Austin State University.

NACOGDOCHES, TEXAS - The SFA Wind Ensemble will present "The Music of Frank Ticheli" at 7:30 p.m. Tuesday, Oct. 16, in W.M. Turner Auditorium on the campus of Stephen F. Austin State University. The event is presented as part of the SFA School of Music's Concert Series.

The concert will feature acclaimed composer Ticheli as guest conductor and will spotlight clarinetist Armenio Suzano as guest artist on Ticheli's "Concerto for Clarinet and Wind Ensemble."

"Frank Ticheli is a vital part of America's music scene, teaching composition at the University of Southern California while composing music for orchestra, band and choir," said Fred Allen, SFA director of bands and of the ensemble. "SFA bands have commissioned him twice - in 1991 for his piece 'Gaian Visions' and in 1995 for 'Blue Shades.'"

Ticheli joined the faculty of USC's Thornton School of Music in 1991 where he currently serves as professor of composition. He has appeared as guest conductor of his music at Carnegie Hall, at many American universities and music festivals, and in cities throughout the world.

Well known for his works for concert band, Ticheli will be on campus for a two-day residency, working with the bands, composition students and music education classes.

Suzano is director of orchestra at Liberty University in Lynchburg, Va. A native of Brazil, Suzano graduated from SFA in 1997. He received a master's degree in music from Northwestern University and a doctoral degree from the University of Michigan. Since leaving SFA, Suzano has performed widely as a clarinetist, pianist and conductor. He has also composed music and is active in church music.

The featured piece in the ensemble's concert will be Ticheli's "Concerto for Clarinet and Wind Ensemble," which was commissioned by and written for the Swedish-American clarinetist Håkan Rosengren, and premiered by him in 2010. Each of the three movements pays homage to an American composer: George Gershwin, Aaron Copland and Leonard Bernstein. Ticheli will guest conduct the concerto.