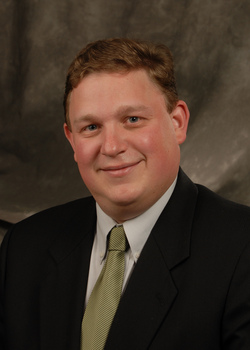 NACOGDOCHES, Texas - Dr. Adam Peck, dean of student affairs at Stephen F. Austin State University, has been elected to serve as vice president for education and professional development for the Texas Association of College and University Student Personnel Administrators.

The association includes administrators, staff and students interested in the professional administration of student affairs programs in higher education. Peck was elected to serve the one-year term by the association's membership, which includes more than 500 individuals representing 70 Texas institutions. He previously served on the group's finance advisory board.

Peck also has served as chair of the Texas Deans of Student Council and as a member of the advisory board for Texas Campus Compact, and he chaired the Educational Advisory Group for the National Association for Campus Activities, where he co-authored and participated in the development of the NASPA Knowledge Consortium Study on Student Activities. In addition, Peck coordinated the professional development workshops for the National Association for Student Activities for four years.