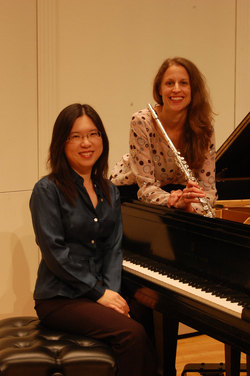 "Americana" features Christina Guenther, flute, and Geneva Fung, piano, performing a program they will take on tour Oct. 6 though 14 when they visit three universities in Ohio.

The program highlights the works of American composers Eldin Burton, Alan Scott, Dan Welcher, Robert Muczynski and Stephen Lias. Scott is the webmaster for the SFA College of Fine Arts, and Lias is professor of theory and composition at SFA.

Burton's "Sonatina" won the New York Flute Club composition contest in 1948 and has become a standard in the flute repertoire.

"It is in three movements with lush and lyrical lines and a strong French influence," Guenther said.

Scott's "Duo for Flute and Piano" is in three-part form with a slow middle section and active, mixed-meter outer sections. It was written for Guenther and Gustavo Bianchi, piano.

Welcher's "All the Words to all the Songs" is "a fun duo for flute and piano influenced by the music of Elvis Presley," according to Guenther. Welcher writes: "This little piece for flute and piano was commissioned by flutist Nancy Andrew, in memory of Vinson Hammond. Vinson, a pianist with a stellar career as an accompanist, died in 1992 of complications from the AIDS virus. He was an avid believer in contemporary music, primitive Southern churches, and Elvis - and did a mean impersonation of the latter, if one can imagine 'The King' singing at the piano."

Muczynski's "Moments" is a piece in three movements.

"This technically challenging work has typical Muczynski rhythmic and intervallic patterns," Guenther said, "and the second movement goes directly into the third without pause."

Lias' "Sonata for Flute and Piano" is a programmatic work in three movements. According to Guenther, the movement titles "aptly describe" what the piece is about - "Wide Blue Run," "Memory Dance" and "Kludge March."

"Americana" is a presentation of the SFA School of Music's Cole Performing Arts Series. The Cole Concert Hall is located in the Wright Music Building, 2210 Alumni Drive.