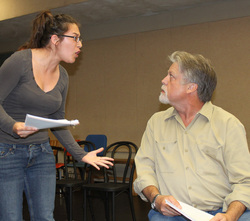 Mission junior Crystal Villarreal and Brad Maule, SFA theatre lecturer and former television star, rehearse a scene from Constance Congdon's "Take Me to the River," which will be presented at 7:30 p.m. Thursday, April 26, and at 5 p.m. Saturday, April 28, in the Downstage Theatre as part of the Stephen F. Austin State University School of Theatre's Festival of New American Plays.

During the five-day festival, each of the plays will be presented two different times for an audience and its playwright in the Downstage Theatre of the Griffith Fine Arts Building. The emphasis is on the author's words, so students will still be using scripts, and there will be minimal scenery, props and costumes, explained Jack Heifner, SFA playwright-in-residence and coordinator of the festival.

"These types of readings are used by professional theatres and producers to involve audiences and actors directly in the process of new play development. Plays are meant to be performed, and the best way to see whether a play works or not is to present it in front of a live audience," said Heifner, whose two one-act plays, "Brilliants" and "Hate Mail," will be presented at 7:30 p.m. Tuesday, April 24, and Friday, April 27.

Heifner is best known for his play "Vanities," which ran for five years in New York and became one of the longest running plays in off-Broadway history. His plays, which number over 30, have been produced in New York and Los Angeles and in theatres around the world. Heifner has written the book to six musicals, including "Leader of the Pack" and "Vanities-a New Musical," which opened in New York in 2009.

John Cariani, whose "Love/Sick" will be presented at 7:30 p.m. Wednesday, April 25, and at 2 p.m. Saturday, April 28, is a successful playwright and actor. His "Almost, Maine" opened off-Broadway in 2006 and has since become one of the most frequently produced plays in the United States and has been translated into six other languages to date.

As an actor, Cariani is best known as Julian Beck on television's "Law and Order." His role as Motel the tailor in the 2004 Broadway revival of "Fiddler on the Roof" won him an Outer Critics Circle Award and a Tony nomination.

Constance Congdon's "Take Me to the River" will be presented at 7:30 p.m. Thursday, April 26, and at 5 p.m. Saturday, April 28, and former television star Brad Maule, SFA lecturer for the School of Theatre, will read the lead role.

Pulitzer Prize winner Tony Kushner has called Congdon "one of the best playwrights our country and our language has ever produced." Her plays are produced around the world, and she has been teaching playwriting at Amherst College for 16 years.

Following the 5 p.m. Saturday performance, all three playwrights will participate in a talk-back session. Due to adult themes and language, all plays are recommended for mature audiences.

The Griffith Fine Arts Building is located at 2222 Alumni Drive on the SFA campus.

The festival is sponsored in part by Tipton Ford-Lincoln of Nacogdoches.