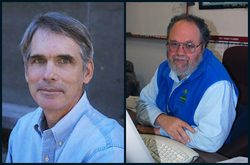 A 2008 Pulitzer-prize finalist, Bill Bishop (pictured on left) and Dee Davis, an expert on rural societal issues (on right), will both be among the featured speakers at the Heritage Development Summit on Thursday, March 8, at Stephen F. Austin State University.

An expert on rural societal issues and a Pulitzer-prize finalist will be among the speakers featured at the second annual Heritage Development Summit on Thursday, March 8, at Stephen F. Austin State University. The event will provide information intended to foster collaboration among individuals and organizations interested in historic preservation, heritage tourism, cultural resources and community economic development.

Dee Davis, founder and president of the Center for Rural Strategies in Whitesburg, Ky., will deliver the plenary address. Davis works with a variety of partners to educate the public about problems and opportunities facing contemporary rural communities.

Davis has served as executive producer of Appalshop Films and Headwaters Television, part of an arts and cultural center devoted to exploring Appalachian life and social issues. During his tenure, the organization created more than 50 public TV documentaries, established a media training program for Appalachian youth, and launched initiatives that use media as a strategic tool in organization and development. Davis has designed national public information campaigns on topics as diverse as commercial television programming and federal banking policy.

Also participating in the event is Bill Bishop, a 2008 Pulitzer-prize finalist for his book "The Big Sort," which explores the cultural dynamics of political self-segregation in America. Bishop has worked on the special projects staff of the Austin American-Statesman. He and his wife, Julie Ardery, owned and operated The Bastrop County Times, a weekly newspaper in Smithville, and now co-edit The Daily Yonder, a Web-based publication covering rural America.

Dr. Jerry Williams, chair of SFA's Department of Social and Cultural Analysis and board chairman of the Center for Regional Heritage Research, will deliver the luncheon keynote address and will discuss the importance of individual and collective identities in building strong communities.

Other speakers and panelists include Dr. Kathleen Belanger, an associate professor in SFA's School of Social Work and a nationally recognized authority on the challenges facing small communities, and Walter Diggles, executive director of the Deep East Texas Council of Governments. The event is funded in part by grants from Humanities Texas and the East Texas Historical Association.

Registration begins at 8 a.m. in President's Suite B of the Baker Pattillo Student Center. The summit is free and open to the public, but space for the luncheon and keynote address is limited. For reservations, call (936) 468-3953 or e-mail the Center for Regional Heritage Research at crhr@sfasu.edu.