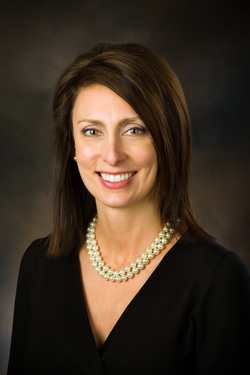 Previously director of development for SFA, Still will assume her new duties immediately. She said she is honored to be given the opportunity to lead SFA's Office of Development where she has served since 1994.

"It is truly a joy to work with SFA alumni, friends and volunteers whose generous ways inspire and motivate me," she said. "I am honored to be serving the university in this role."

Still, a Nacogdoches native, earned a bachelor's degree in business administration from Texas A&M University and a master's degree in business administration from SFA. In addition, she is a Certified Fund Raising Executive. She has served in a leadership role in the development office for 16 years with titles of director of special programs, associate director and director of development. As director, Still has administered the daily operations of the Office of Development, coordinated university special events and overseen giving programs and campaigns.

"I have had the privilege of working with Jill for approximately 18 years as she has held various positions with the university," said Dr. Baker Pattillo, SFA president. "She has always served SFA with distinction and professionalism, and I am very pleased to now have her as part of our administrative team."

Still is a member of the Nacogdoches Heritage Heralds and the Council for the Advancement and Support of Education. A member of First Christian Church, she resides in Nacogdoches with her husband, Joe, and their three sons, Preston, Carson and Joe Evan.

Still replaces Dr. Sid Walker who resigned as vice president for development in May to accept a position in the private sector.