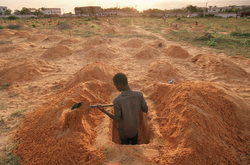 This photograph of a father digging a grave for his daughter in Mogadishu, Somalia, in 1992 earned photographer Howard Castleberry a Pulitzer Prize nomination. It is included in "Two Cities: A Path to Faith (1983-1992)," which will open at 6 p.m. Saturday, June 2, at The Cole Art Center @ The Old Opera House in downtown Nacogdoches. Castleberry, now an Episcopal priest, is the rector at Christ Episcopal Church in Nacogdoches. (Photograph © Howard Castleberry)

Before he became an Episcopal priest, however, Castleberry worked for about 20 years as a photojournalist for The Dallas Morning News, National Geographic and The Houston Chronicle. And during those two decades, he was nominated for the Pulitzer Prize four times and won several national and international photojournalism awards.

The Stephen F. Austin State University School of Art will open an exhibition of Castleberry's photographs, "Two Cities: A Path to Faith (1983-1992)," with a 6 to 8 p.m. reception, Saturday, June 2, at The Cole Art Center @ The Old Opera House, 329 E. Main St. in downtown Nacogdoches.

The show's title refers to the subjects of the photographs but also the impact Castleberry's assignments in Annapolis, Md., in 1983 and Mogadishu, Somalia, in 1992 had on his faith journey and eventual ordination.

The exhibition will be on view in the upstairs Reavley Gallery through Saturday, June 30.