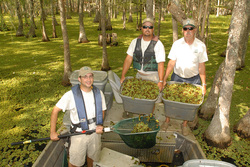 A thorn in the side of area boating enthusiasts may provide a ray of hope for some cancer patients, according to recent research findings at SFA's National Center for Pharmaceutical Crops.

The Texas Parks and Wildlife Department has collected about 1,000 pounds of plant matter in East Texas for use in the study. To date, more than 30 different compounds, including four new compounds, have been isolated from the giant salvinia. Further tests of the bioactive compounds isolated from giant salvinia are ongoing in Dr. Bharat B. Aggarwal's lab in M.D. Anderson Cancer Center in Houston.