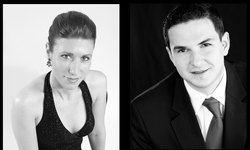 NACOGDOCHES, TEXAS - The inspiration for the Orchestra of the Pines' season-closing concert, "Spanish Nights," occurred many years ago when music director Gene H. Moon watched a video of the Vienna Philharmonic's New Year's concert of the same title.

"The orchestral repertoire of Spanish music is so invigorating, vibrant and exciting that I knew I wanted to put on a similar concert," said Moon, who serves as the music director of the flagship orchestra at Stephen F. Austin State University.

"Spanish Nights" is scheduled for 7:30 p.m. Saturday, April 28, in W.M. Turner Auditorium, as part of the SFA College of Fine Arts' University Series.

Adding to the excitement of the music will be two guest artists: violinist Cristian Fatu, who was a semi-finalist in the 2011 Schmidbauer International Competition, and mezzo-soprano Erin Roth, a Lufkin native who earned her bachelor's and master's degrees at SFA and now sings professionally.

"Cristian's playing style is very romantic and provocative, which is brought out even further by his Romanian heritage," Moon said. "Works like the Czárdás and the Carmen Fantasy are styles that are second-nature to him; he plays them with grace, panache and beauty."

"East Texans will remember that each time Roth graces the stage, her voice carries a personality that is easily remembered for its projection, direction and focus," Moon said. "The arias she will sing with us will be indicative of these characteristics."

The orchestra will open the concert with Maurice Ravel's "Bolero" and also perform "Jota" from Manuel De Falla's "Three Cornered Hat" and Arturo Marquez' "Danzon No. 2."

Prior to the concert, Moon will give an informative talk at 7 p.m. in Griffith Gallery, directly across the hall from Turner Auditorium. The audience is invited back to the gallery after the performance for a reception honoring the event's corporate sponsor, Memorial Hospital, and to meet the musicians.