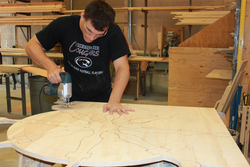 NACOGDOCHES, TEXAS - Tickets are now on sale for two popular shows that comprise the Stephen F. Austin State University School of Theatre's summer season, the children's musical "How I Became a Pirate" and the Southern classic "Steel Magnolias," both of which will be performed in W.M. Turner Auditorium.

The season will open at 6:30 p.m. Friday, June 22, with "How I Became a Pirate," Janet Vogt and Mark Friedman's one-hour musical adaptation of the best-selling book written by Melinda Long and illustrated by David Shannon.

"Pirates of all ages will enjoy the adventures of young Jeremy Jacobs, who sails away with Captain Braid Beard and his comical crew but eventually discovers his heart is back at home." said Angela Bacarisse, SFA associate professor of theatre and the show's director.

"Perfect for a date night or adult group outing, we're also presenting Robert Harling's hilarious and heartfelt comedy, 'Steel Magnolias,'" said Scott Shattuck, director of the SFA School of Theatre. "Many East Texans are familiar with the characters and storyline because of the blockbuster film starring Sally Field and Julia Roberts, but here's a chance to step inside Truvy's Beauty Shop and meet the women of Chinquapin Parish close up!"